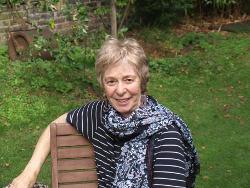 Michelle Berriedale-Johnson on how “free from” started in the UK!

FreeFrom Foods matter – how “free from” started in the UK!

Whenever people with food allergies or intolerances travel to the UK they are hilarious about the massive choice of free from products. Instead of one shelf presenting a choice of gluten free products, UK supermarkets offer complete aisles for only gluten free bread, gluten free cereals and snacks or dairy free cheeses. How did it all happen? When the Free From Food Awards Deutschland 2016 jury meeting took place in Berlin, MeinAllergiePortal had the chance to talk to Michelle Berriedale-Johnson, “free from” food pioneer, founder of FoodsMatter and initiator of the UK Free From Foods Awards.

Michelle, you have known the Allergies and Free From Food“-community for thirty years, what are the major changes?

A tremendous amount has changed in thirty years!!! When I originally started in 1988, there was no such thing as free from food – the term had not even been invented. For people with dairy allergy there was horrible soy milk and for people with celiac disease there was one type of bread that would break your toe if you kicked it – there was virtually nothing!

By the turn of the century many people with allergies or celiac disease had started experimenting. They had to cook for themselves, simply because they could not find anything to buy. When they had developed products they and their families liked and even their friends thought they were good, they started thinking: Why don’t we start a business? This was exactly when the growth of the internet came along, so people would start tiny businesses with a little website and sell by mail order. This meant they did not have to work with retailers or distributers, but could sell directly to the public, so all these little micro businesses started up.

So the UK-‘free from” market was originally dominated by small businesses?

Absolutely, but gradually the small start up’s became bigger. One example is Doves Farm, which was started as tiny micro business by Clare Marriage because her mother was celiac but now has a multi million pound turnover.

At that point some of the big manufacturers became interested in the “free from” trend. Genius Bread, for example was developed from a domestic recipe by Finsbury Foods, who are a very big manufacturer in the UK. They then built a dedicated gluten free bakery and this was a major leap forward. It was the first time one could get a gluten free supermarket bread, which means a packaged sliced bread with a two week shelf life, which would compare to an ordinary supermarket bread.

Over the years the UK market has changed enormously, from a tiny 100.000 £ “free from” market to – according to the latest forecasts – a half a billion £ turnover  “free from” market by next year. Within the food industry, a very traditional industry which does not expand very much, the “free from” area is the one area which is still continuing to grow year by year.

MeinAllergiePortal/Nahrungsmittelallergie und -unverträglichkeiten/FreeFrom Foods matter – how “free from” started in the UK!